Lovlina Borgohain, Olympic Bronze Medalist Boxer from Assam is appointed as DSP in Assam Police. The ceremonious event sought presence of CM Himanta Biswa Sharma who was present throughout the Pipping Ceremony and believed that she will be inducted into IPS in due course of time.

Referring to enlistment of other sportspersons in the Assam Police since last year, in line with the state’s new policy, Sarma said sports should not be viewed as a co-curricular activity anymore.

“Earlier, parents used to dissuade their children from pursuing sports after a certain age as there was no guarantee of a successful career even if someone excelled in a discipline. We want to change that. We want to prove that sports itself can be a career,” he asserted. 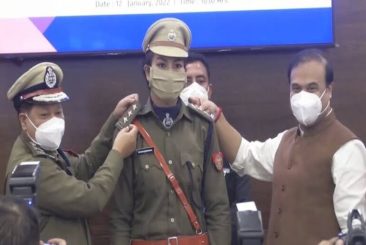 Apart from this Himanta Biswa sharma stated that government is working towards increasing the sports quota in various department.  In similar pursuit, Government has established a 25 crore stadium in Sarupathar Assembly which was named after Lovlina Borgohain.

Lovlina Borgohain, in her brief speech on the occasion, said, “This is a memorable day for me as I am joining the Assam Police.”

“I will give my best in the boxing ring and bring more glory to my state and people,” the Khel Ratna awardee added as her eyes welled up with tears.

The pugilist scripted history last year by becoming the first sportsperson from Assam to win an Olympic medal. She clinched the bronze in the welter-weight category in last year’s Tokyo Games.

Awarding a DSP position in state Police has been an age long tradition where special sports mention gets to serve the people donning the suit as professional. Hima Das was also awarded with Police rank an year earlier.