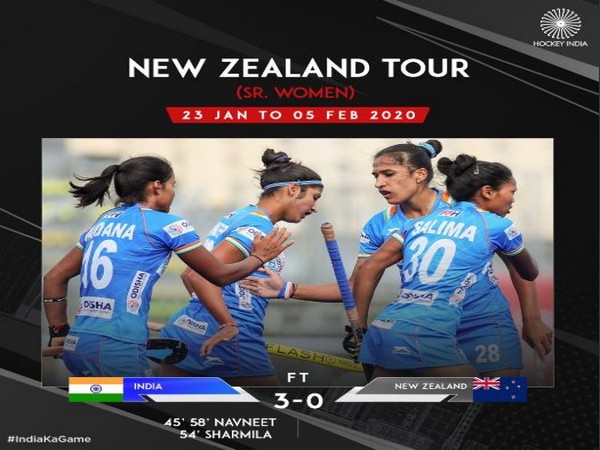 Auckland [New Zealand] Feb 5 : In the final match of the New Zealand tour, India women’s hockey team registered a 3-0 win over the hosts to end their tour on a high here on Wednesday.

India’s Navneet Kaur scored the opening goal of the match in the 45th minute. Soon after, youngster Sharmila doubled the lead when she struck a powerful shot past New Zealand goalkeeper in the 54th minute.

India continued their attacking mindset in the match and Navneet netted another goal in the 58th minute to take the scoreline to 3-0.

India chief coach Sjoerd Marijne said the tour provided them with good insight about where they need to improve.

“The team ensured a good ending to the tour and I am happy we produced three goals against New Zealand in the last match. This tour gave us a good insight about where we need to improve and one of the things is to create faster play than we do now,” Hockey India’s official website quoted Marijne as saying.

India competed in five matches during the tour and secured a massive 4-0 win against New Zealand Development Squad in the first match. After starting the tour on a good note, India suffered two consecutive defeats at the hands of the New Zealand national team. However, the visitors made a winning comeback in their previous match, registering a 1-0 win over Great Britain.

Analyzing India’s performance during the tour, Marijne said: “Sometimes we tend to keep the ball too long on the stick and then we create pressure to our own self. We need to avoid that by passing faster. On the defence side, we need to be a bit more calmer and need to improve how we tackle. We will have a four week camp after a short break now when we return home. We will be working on these points during the forthcoming camp apart from a few other aspects.”

The team will return to India on February 7.

It was a special night: Neco Williams after win over Shrewsbury