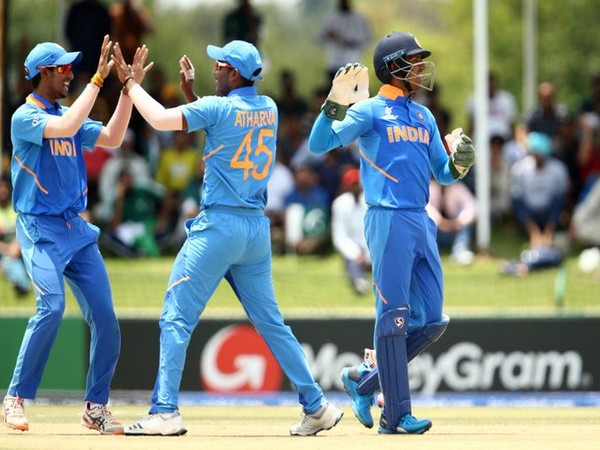 Potchefstroom [South Africa], Feb 4 : India have restricted Pakistan to a below-par total of 172 in the semifinal of the ICC U19 World Cup here at Senwes Park on Tuesday.

Pakistan won the toss and elected to bat. Opener Haider Ali and skipper Rohail Nazir’s half-centuries guided the side to a respectable total. Ali played a knock of 56 runs while Nazir accumulated 62 runs including six boundaries.

Pakistan did not have a good start as they lost Mohammad Hurair (4) in the second over. Fahad Munir, came to bat at number three, failed to score a single run and was departed by Ravi Bishnoi on a duck in ninth over.

Apart from Ali and Nazir, Mohammad Haris was the only batsman to score runs in double digits. He played an innings of 21 runs off 15 balls.Indian bowlers showed a spirited performance as they bowled out arch-rival in 43.1 overs.

India will now need 173 runs in 50 overs to advance to the final of the tournament. The last eight U19 World Cup finals have featured at least one of Pakistan or India. In the tournament, both teams have managed to remain unbeaten.