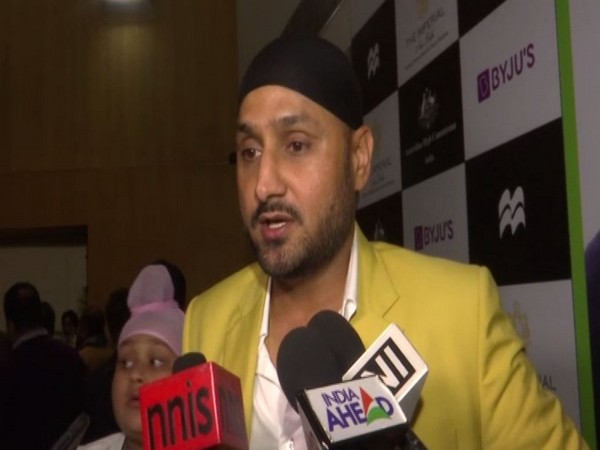 New Delhi [India], Nov 25 : India spinner Harbhajan Singh on Monday said that the selection panel of the Board of Control for Cricket in India (BCCI) needs to be changed and urged the body’s chief Sourav Ganguly to the needful in this regard.

Harbhajan’s remarks came in support of Sanju Samson who was dropped from the upcoming West Indies series. Quoting Congress lawmaker Shashi Tharoor’s tweet in which he expressed disappointment over the snub to Samson, the bowler said that the selection panel needs ‘strong people’.

“I guess they r testing his heart #selectionpanelneedtobechanged need strong people there.. hope dada @SGanguly99 will do the needful,” Harbhajan tweeted. 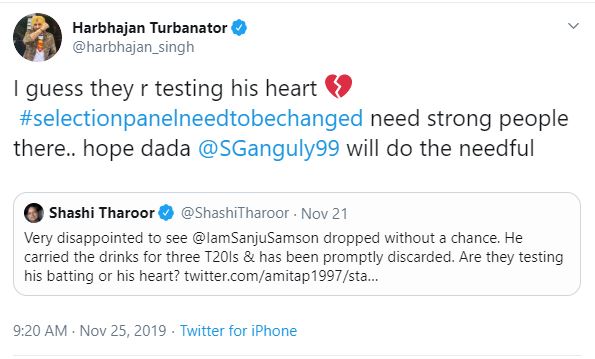 The MSK Prasad-led selection committee has been facing criticism for not including Samson in the limited-overs squad for the upcoming T20I and ODI series against West Indies.

“Very disappointed to see @IamSanjuSamson dropped without a chance. He carried the drinks for three T20Is & has been promptly discarded. Are they testing his batting or his heart?” Tharoor had tweeted.

On November 21, India had announced the T20I and ODI squad for the series against West Indies.

Samson was named in the T20I squad for the series against Bangladesh, but he did not get a chance to feature in the playing XI as Rishabh Pant was given a nod ahead of him.

The wicketkeeper-batsman has scored 112 runs from four games in the ongoing Syed Mushtaq Ali Trophy.

The Men in Blue are slated to play three T20Is and three ODIs against West Indies. The first T20I will be played on December 6.