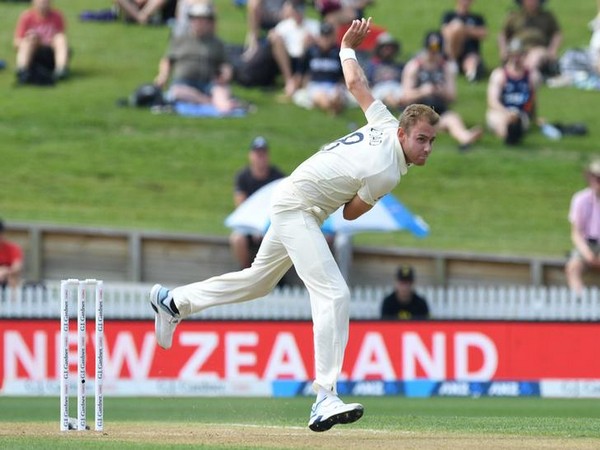 London [UK], Nov 30 : England pacer Stuart Broad is of the view that the team has to bat 150 overs to take the Test match on the last day against New Zealand.

England lost the first Test against New Zealand by an innings and 65 runs. In the ongoing second Test, England were at 39/2 at stumps on day two after restricting the hosts on 375.

“We know we’ve got to go and bat 150 overs here to set up the game on day five. Our opportunity is there. There’s not a lot happening in the pitch, there’s not a lot of scoreboard pressure. There’s a chance for a couple of people to go and get hundreds,” ESPNcricinfo quoted Broad as saying.

Broad, who picked up four wickets, has said that opener Rory Burns is their vital batsman as he has the ability to score runs to his favourite areas.

Burns is unbeaten at 24 runs along with skipper Joe Root (6*) and will resume their innings on day three.

“Someone like Rory Burns is our key batsman because he’s a player that has his areas that he scores in. If he can stay in that bubble and not chase balls outside off stump, he’s someone who could go and get 200,” Broad said.

“We need someone to go and get a big hundred for us to win this game and we’ve got the players to do it. If a batsman really applies himself on these pitches and doesn’t play loose shots and wants to just score in their area, they can be a real handful,” he added.

England lost its opening wicket with just 11 runs on the board as Tim Southee had Dom Sibley (4) adjudged leg-before wicket in the seventh over of the innings. 13 runs later, the visitors lost their second wicket as Matt Henry had Joe Denly (4) caught at the hands of wicket-keeper, reducing England to 24/2.

Resuming day two at 173/3, New Zealand lost its fourth wicket quite early as Tom Latham (105) was clean bowled by Broad in the 56th over. Nine runs later, Henry Nicholls (16) was also sent back to the pavilion by Sam Curran, reducing New Zealand to 191/5.

BJ Watling and Daryl Mitchell then got together at the crease and the duo put on 124 runs for the sixth wicket. Their partnership saw both batsmen bringing up their respective half-centuries.

It was finally Broad who provided the crucial breakthrough for England as he dismissed Watling (55) in the 117th over, reducing Kiwis to 315/6.

Immediately after the tea interval, Broad struck one again as he dismissed the set batsman Mitchell (73), bringing New Zealand’s score to 330/7.

The last three wickets were able to add 45 more runs and the side was finally bowled out for 375.