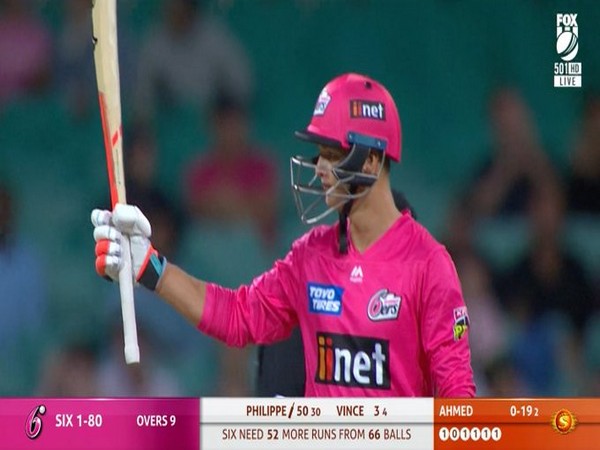 Chasing 132, Sixers got off to a steady start as openers Josh Philippe and Daniel Hughes put on 58 runs in the first six overs.

Scorchers finally got the breakthrough in the eighth over as Chris Jordon dismissed Hughes (22), reducing the Sixers to 73/1.

James Vince then joined Philippe in the middle and both the batsmen put on 35 runs for the second wicket, but with just 23 runs away from the target, Scorchers sent Vince (13) back to the pavilion.

Skipper Moises Henriques then got together with Philippe and the duo ensured Sixers’ victory by eight wickets and with 30 balls to spare.

Earlier, a spirited bowling performance by Sixers enabled them to bundle out the visitors Perth Scorchers for a below-par score of 131.

Scorchers got off to the worst start possible as the side lost its opening four wickets with just 29 runs on the board. Liam Livingstone (0), Cameron Bancroft (1), Josh Inglis (22) and Aston Turner (1) all failed to leave a mark.

Mitchell Marsh and Cameron Green then retrieved the innings for Scorchers as the duo put on 58 runs for the fifth wicket. When the partnership started to flourish, Sixers got the key wicket of Green (36) in the 14th over, reducing Scorchers to 87/5.

Soon after Marsh (32) was also sent back to the pavilion by Benjamin Manenti. After this, Sixers kept on taking wickets at regular intervals and as a result, they bundled out the visitors for just 131.