India’s top wrestler Bajrang Punia on Tuesday said not even an Olympic medal will heal the pain of his controversial semifinal loss at the just-concluded World Championships.

The 25-year-old from Haryana, who had claimed bronze and silver in the last two editions, lost to local favourite Daulet Niyazbekov in the 65 kg semifinal following some debatable decisions by the judges in Kazakhstan. The two were tied 9-9 after the bout but the Kazakh was declared winners by points, robbing Bajrang a chance to fight for the gold medal. The Indian had to be contend with a bronze.

“It is very demoralising when you lose due to bias or someone wins by cheating because I didn’t do anything wrong. I didn’t lose out the gold because of my mistakes,” Bajrang told PTI during a chat.

“I know I have to forget this pain. I have to put this aside to do well in the future tournaments but it is difficult to get over it.”

Will an Olympic medal ease the pain, Bajrang didn’t think so at this point of time.

“World Championship and Olympics are different tournaments. I am preparing for Olympic and I had put a lot of effort for World Championship also, so I don’t think I can forget it. Whenever something similar will happen, I will remember this incident,” he said.

Bajrang, who has claimed gold medals at 2018 Asian Games, 2018 Commonwealth Games and 2017 Asian Championship, said it wasn’t the first time he had to face bias.

“I have been at the receiving end of such discrimination in all the three World Championships. Last year also it happened in the final,” he said.

“Our president has objected to it this time and told them why it is happening to Indian wrestlers time and again and they assured it won’t happen again,” he said.

Asked if he is satisfied with his performance at the World Championships, Bajrang said: “I am just happy that I could win a third medal for my country at the tournament. But it wasn’t my best. If I could have got a chance to win the gold, then I could have showed.

“In the first bout, I won easily and I did work on my leg defence ahead of the tournament and I gave very less chance in that area this time. So now I will work on it further so that I don’t give any chance to my opponents to get hold of my leg,” he said.

“I need to work on all areas. Overall, whether it is leg defence, attack or counter attack, I need to keep improving in all aspects going ahead.”

Deepak Punia had claimed his maiden silver at the World Championships in the 86kg before he was forced to pull out of the final due to an ankle injury.

“I had suffered this injury in the first round itself but I kept competing and so it got aggravated. If I would have played in the finals, I might have needed a surgery so we decided to skip it,” he said.

“The physio said it will take another 15-20 days to recover completely,” added Deepak, who took up wrestling after watching Sushil Kumar winning a bronze at the 2008 Beijing Olympics.

Last month, Deepak had become the first Indian to win the World Junior Championship in 18 years and the youngster said it gave him the confidence to do well in Kazakhstan.

“I have to work on my technique now. I lacked experience as it was my first world championships, so as I grow in confidence it will help. 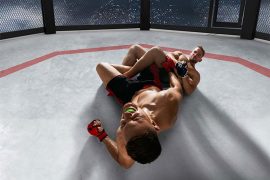