The third major of the year is usually one that pits players against the unpredictable elements. For that reason, it’s even more important that players have everything they need to perform their best on the course. 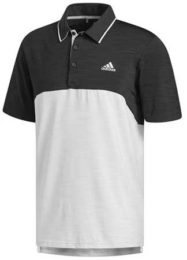 Today Adidas Golf revealed the featured apparel from the fall 2018 line that players will rely on as they seek to make history at the 147th Open Championship.

All players at some point throughout their rounds will once again look to the best polo Adidas has ever made, the Ultimate365 Polo that launched in January of this year. Touted as the most consistent fitting polo in the line, it will provide the perfect amount of breathability, stretch, drape and weight that player’s need in the tough conditions along the Scottish coastline.

Dustin Johnson returns to Carnoustie – this time as the top-ranked player in the world – on a mission to claim his second major. The FedEx Cup points leader will be wearing the Ultimate365 Polo along with the 3-Stripes Heather Blocked Polo in his traditional navy colorway paired with the Ultimate Flat Front Pant and 3-Stripes Pant. DJ’s full apparel will be:

Jon Rahm makes his third career start at the OPEN Championship, looking to capture his first major and further solidify his spot on the European Ryder Cup team. The world No. 5 will rely on the Ultimate365 Polo and adidas Bold 3-Stripes Polo with the Ultimate Flat Front Pant and 3-Stripes Pant. Rahm’s polo lineup includes:

Sergio Garcia returns to Carnoustie looking for redemption following his dramatic second place finish when the Open Championship was contested there in 2007. Sergio will be wearing the Ultimate365 Polo along with the adidas Bold 3-Stripes Polo in white, grey and blue colorways as a subtle nod to the oldest championship in golf. He’ll pair the polos with the Ultimate Flat Front Pant and 3-Stripes Pant. Sergio’s attire will consist of:

Something new in every player’s bag will be the Go-To Adapt Jacket (MSRP $90), the latest from adidas that offers all-weather protection built to function specifically for the golf swing. The water-resistant fabric combines with a fleece-lined shell to give all players a grab-and-go option that they can trust on the course.

Committee set up to synergise NCC and NSS