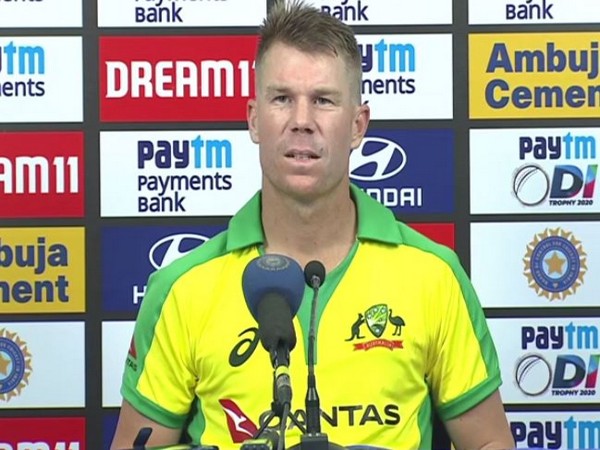 Mumbai (Maharashtra) [India], Jan 14 : After defeating India in the first ODI, Australia opener David Warner said that Aaron Finch’s innings of 110 runs was the best that he has seen so far.

“The most pleasing thing for me at the other end was to seeing Finch transferring his weight into the ball very well. Tonight was probably the best that I have seen him bat and credits goes to him,” Warner said at the post-match press conference.

With securing a 10-wicket victory, Australia now leads the three-match series with 1-0 score. Warner remained unbeaten at 128* while Finch remained not-out on 110*.

The 33-year-old said he is in good form and has a desire and hunger to score runs.

“I have a hunger and desire to score runs all the time. My feet are moving well and we everything going well for you got to make sure you practice the same and you are doing all the hard work, ” he said.

Warner became the fourth-fastest batsman to smash 5000 ODI runs. The left-handed batsman achieved the feat in 115th innings. He surpassed England’s Joe Root who had scored these many runs in 116 innings.

Warner said that the team is very stable with great bowlers as well as batsmen on their side.

“We have a great bunch of guys together. We have a great bowling unit we have got pace and spin. In batting we have great depth, we have power and we got guys who work it around in the middle, who can accelerate and go when they need to. At this moment we have stability and it’s good to see,” he said.

After being put in to bat first, India scored 255 runs in 50 overs. Shikhar Dhawan played a knock of 74 runs while KL Rahul scored 47 runs.