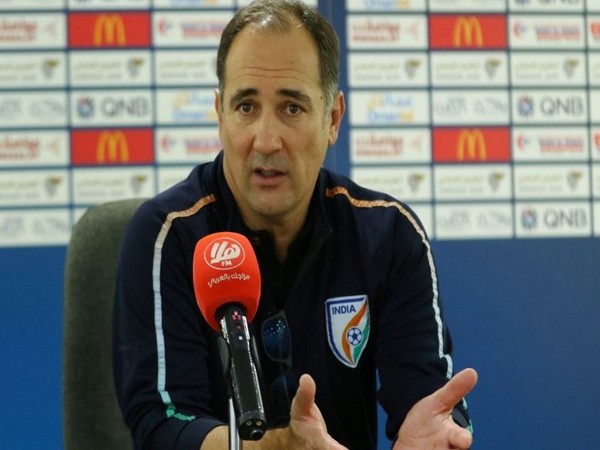 New Delhi [India], Dec 7 : Igor Stimac, who joined the Indian football team as its head coach six months back, has said that “there is a great difference now in the quality of our game and one can look at the statistics and facts to see it.”

“We have just started our work in the last six months. There is a great difference now in the quality of our game and one can look at the statistics and facts to see it. For example, we now have seven players who can cover over 12,000 metres in a match including 1,000 metres of sprints,” said Stimac in a statement.

“We have had a great few games and some tough ones as well. The toughest games are where you are considered favourites and now I can easily say that India has become a team that is difficult to beat. We need to mature our game and continue putting in quality work in order to keep moving forward,” he added.

The coach pointed out the improved defensive record of the Blue Tigers, citing the number of goals conceded in the first five FIFA World Cup 2022 qualifiers, which featured the memorable draw away to Asian champions Qatar.

“In the five games so far, we have conceded only five goals. The number was 18 in eight matches in the previous qualifiers (2018 FIFA World Cup). There is a big difference now,” Stimac said.

Stimac’s tenure has seen a number of players taking their senior team bows, with a significant portion of them establishing themselves as regular names on the Indian team sheet.

The Croat shared his point of view on team selection and stressed on the importance of consistency in a player’s performance.

“I do not see if a player is young or old. For me, it’s either good or not good enough. The door is open to everyone. There are 11 players in the starting line-up and 23 on the team-sheet. The best performers will get a chance but they have to be consistent. The good performance needs to be maintained for the whole season and there needs to be a degree of continuity,” said Stimac.

“Not many people know what we are working on when there are no games. I have dedicated myself a million per cent into the job. It’s not just about choosing 23 players and having training sessions,” he said.