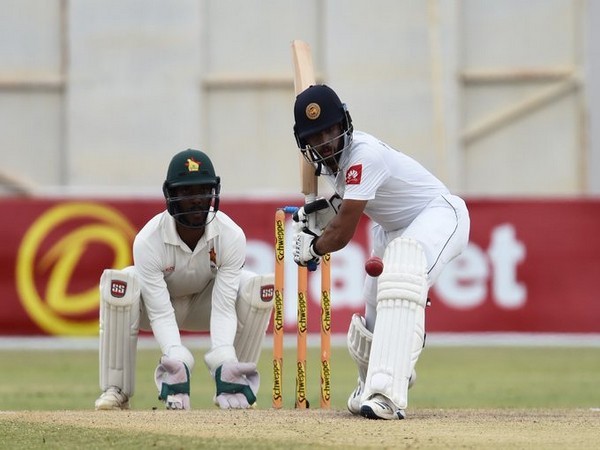 Harare [Zimbabwe], Jan 31 : Neither Zimbabwe nor Sri Lanka were able to force a result on day five of the second Test, and as a result, the match ended in a draw with the Islanders clinching the series 1-0 here on Friday.

Zimbabwe after adding six runs to the overnight score of 241/7 declared their second innings.

Sri Lanka did not start well in their second innings and lost Dimuth Karunaratne (12) in 14th over. Oshada Fernando and Kusal Mendis looked in good touch and took the side past 100 runs mark.

After putting on 81 runs stand for the second wicket, Fernando got out in the 39th over after playing a knock of 47 runs.

Angelo Mathews came to crease and partnered for 37 runs with Mendis. Victor Nyauchi in the 62nd over dismissed Mathews (13), reducing the side to 140-3.

Mendis was in sublime touch as he brought up the seventh century of his career against Zimbabwe.

Mendis and Dinesh Chandimal remained unbeaten on 116 and 13 respectively ensuring that Sri Lanka do not suffer from any more hiccups and the match ended up as a draw.

Earlier, Sean Williams and Sikandar Raza’s knocks of 107 and 72 helped the hosts post a score of 406/ 10 in their first innings. While the Sri Lankan side did not perform up to the mark and were bundled out on 293 runs.

Pakistan defeats Afghanistan by six wickets in U-19 World Cup