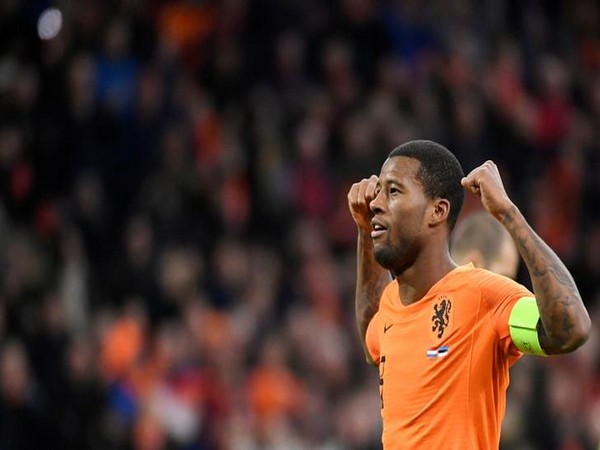 Liverpool [UK], Nov 28 : Liverpool’s Georginio Wijnaldum feels that his club was a better team in the second half during their clash against Napoli.

Liverpool witnessed a 1-1 draw against Napoli in Champions League on Thursday. Dejan Lovren had scored an equaliser for Liverpool in the 65th minute but the club failed to score another goal.

“We started well in the second half, we were the better team in the second half but it didn’t result in a lot of chances, or a lot of big chances and that’s something we have to work on, in circumstances like this to still create chances,” the club’s official website quoted Wijnaldum as saying.

Wijnaldum said that Liverpool fought till the end and is happy with Lovren’s strike.

“We tried to fight until the end of the game and that’s what we did. We were happy that we could score the equaliser. Now we have to finish it against Salzburg,” he said.

The club will now compete against Salzburg and need to avoid a defeat in order to secure passage to get into the knockout stages of the competition.

Wijnaldum stated that they will have to give everything during the match against Salzburg.

“In this case, you mustn’t be too comfortable because we know how good Salzburg can be. We know how good we can be if we are concentrated and give 100 per cent. Every game is different,” Wijnaldum said.

“What we have to do is give everything and try to make the best of it. Hopefully, we’ll get a good result there,” he added.

Dravid disappointed over Indian coaches not getting opportunities in IPL