Want to win games for my country: KL Rahul after scoring 91-run in series decider 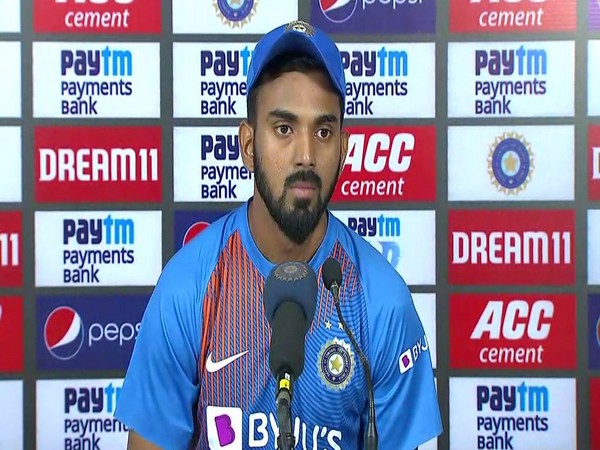 Mumbai (Maharashtra) [India], Dec 12 : India opener KL Rahul, who played a knock of 91 runs, said that he wants to win games for the country and enjoy batting in the middle.

India defeated West Indies by 67 runs in the third T20I to win the series 2-1. India posted a mammoth score of 240 runs for the loss of three wickets. KL Rahul, Rohit Sharma and Virat Kohli all registered half-centuries.

The Men in Blue later restricted Windies to 173/8 and went on to win the match comprehensively.

“I’m not at that stage where I worry about whether I find myself playing in the next tournament. I want to win games for my team and be out there in the middle and enjoy my batting,” Rahul told reporters in the post-match conference.

The opener further added that he loves batting at the Wankhede Stadium as the pitch offers bounce and pace which makes it easy for batsmen to score runs at a fast pace. His innings was studded with four sixes and nine four’s.

“I love playing at the Wankhede. Any wicket that has pace and bounce is good for batsmen. Wankhede is one such ground where we get to play our shots freely. The crowd is electric here,” Rahul added.

India had a poor record of losing T20I in which they bat first and the player said that the side is working on improving that record.

“We are looking to work on our first innings if whenever we have to bat and start the innings. It is good learning for us in each game we play. We get the opportunity to bat first, we learn something new. Today was a good confidence booster for all of us. We did a lot of things right and hopefully, we continue to do that more often,” Rahul said.

Rahul was awarded player of the match for his 91-run innings off 56 balls. He said that it is never easy for batsmen to make a come back in the game as there is pressure in every game.

“Going in and out of the team is never easy for any player. You take a little bit of time to get used to international pressure and there is no opposition where you can walk in and score runs. My process is me being out in the middle and trying to do what I do best. Staying in that rhythm is important for me and I got that opportunity to play first-class cricket and gain some confidence,” Rahul said.

Both West Indies and India will next lock horns with each other in the three-match ODI series. The first ODI will be played in Chennai on Sunday, December 15.