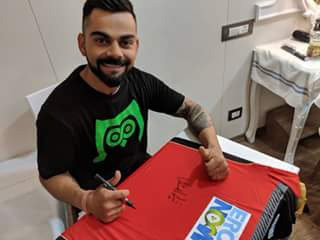 In a content where participants can win exclusive prizes signed by Virat Kohli, Mr Owl has announced the launch of the #MrOwlChallenge.

Following a partnership between Virat Kohli and MrOwl announced earlier this year, the #Challenge come into effect.

The #MrOwlChallenge is scheduled to run from 23 September to 20th of October, will grant 170 winners a variety of prizes including memorabilia signed by Kohli and Gifts cards valued at 1000 each.

The participants can take part in the #MrOwlChallenge by just registering for MrOwl and follow @Viratkohli on MrOwl. This method automatically takes users into random drawings or gifts cards from Puma One8, WROGN and MuveAcoustics.

The CEO and Co-Founder of MrOWl, Arvind Raichur seems quite excited with the challenge and its outcome enhancing the brand image of new branches.

He said, “Because of the platform’s unique digital storage and organization capabilities, new branches on MrOwl have the potential to be valuable resources, stores of collective knowledge to a degree that no other search or social platform can match. Branches are more than a collection of pictures, videos or links. They are artefacts of an interested community.”

For Kohli, the challenge retains a different interest altogether.

Their partnership was based on the platform’s ability to provide him more authentic ways to connect with his fans. “The #MrOwlChallenge creates the opportunity for me to give back to my fans,” Kohli said. “I’m excited to see what they build MrOwl branches on.”

Cornerstone Sports and Entertainment COO Jogesh Lulla also notes that “we associated with MrOwl with the intention to get Virat’s fans closer to him. Giving them an opportunity to get personally signed merchandise by Virat, is just another step to accomplish that. ”

A community Interest Engine, MrOwl, brings together the best social, search and digital organization all in one app.

The app let users to accumulate several topics, seek inspiring ideas and share informative knowledge with the community and explore their interests.

HealthXP signs Sahil Khan as its Brand Ambassador in India