Indian leading Middle –Weight  boxer Vijender Singh has signed a Multi-Year deal with Legendary promoter Bob Arum’s Company ‘Top Rank’, opening gates for his debut on the US land after remaining unbeatable and invincible in India and England.

Vijender, the 2008 Olympic bronze-medalist, has fought all but one of his professional bouts in India and England. He will make his debut under the Top Rank banner in early 2019, his India promoters IOS Boxing said in a statement.

In a statement Arum said, “Top Rank is very excited signing up Vijender into the team and we will make him a ‘big star’ in the United States and look forward to him participating major events in India, where he already a major superstar,”

Bob Arum is a prominent boxing promoter who has worked with a lot many international top ranking boxers including Manny Pacquiao .

Vijender who has a record of 10-0(7 KOs) since his entry to the pro-boxing industry, said he couldn’t hope for a better deal.

He commented over the deal and said, “I have always wanted to work with someone who is the best in the business, and I know Top Rank has been the driving force behind boxing’s biggest superstars, including Oscar De La Hoya, Floyd Mayweather, and Miguel Cotto,”

He added more, “I am eagerly waiting a date for my U.S. debut to take on the world and keep the Indian flag on the world boxing map fluttering high,”.

Being the first indian boxer to bring a medal in Olympics, the 33-year-old-year middle weight boxer has won India’s maiden world championship medal in 2009.

Since his last fight in 2017 in December against Ghanaian Ernest Amuzu in Jaipur, Vijender has not fought any fight this year. 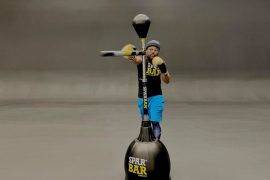 SPARBAR Boosts its ‘Boxing For Everyone’ Initiative with Official Apl.de.Ap Collaboration