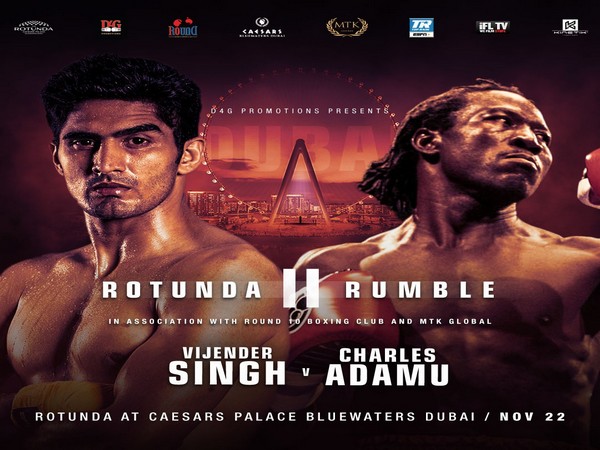 Dubai [UAE], Nov 18 : After a successful US debut, India’s knockout king Vijender Singh is all set for his next challenge against former Ghanaian Olympian and two times Commonwealth Super Middleweight Champion Charles Adamu in the Rotunda Rumble 2.

WBO Asia Pacific and Oriental Super Middleweight Champion Vijender is promoted by top ranks and IOS Boxing Promotions to take on Adamu in a 10-rounder fight.

The 34-year-old Vijender defeated Mike Snider during his US debut in July this year to register 11th win of his professional career, currently, he holds a record of 11-0 with 8 knockout wins.

Adamu, 42, is one of Vijender’s most experienced opponents and will prove a stern test for the big-hitting Indian.

“After having rigorous training sessions for more than two months, I am fully prepared to end my year on a winning note. For me, this fight will be a build-up to the world title which I am aiming in 2020. I am sure my debut fight in Dubai is going to be an exciting one and I am looking forward to a knockout win in the early rounds,” Vijender said in an official statement.

“No doubt Adamu is an experienced opponent, he will give me a few new tests, he has done more rounds than me, but will that compete with the power that I have and when I start landing my shots I don’t believe he will be standing around too long, I am really excited for this fight,” he added.

Former Commonwealth Super Middleweight Champion Adamu is a veteran, having taken part in 47 fights with a decent record of 33-14-0 with an impressive 26 knockouts to his name. He is confident of defeating Vijender in the early rounds.

“I will bring my experience into play and look to play on the mind of Vijender Singh. Before all my fights I spend time analysing my opponent’s strengths and weaknesses. Vijender Singh must know that this fight isn’t going to be easy for him. If he thinks I’ll be one of his earlier opponents whom he’ll brush by then he’s very mistaken,” Adamu said.

“I am a two-time former Commonwealth Super Middleweight champion and will put up a tactical masterclass he’s never seen before. I have fought more than three times the number of fights he has. This is by far going to be his biggest challenge so far,” he added.

Vijender will take on Adamu at Caesars Palace in Dubai on November 22.

Pooran will learn from his mistake: Steve Smith on ball-tampering

Not thinking about revenge, only points matter: Sunil Chhetri ahead of Oman clash