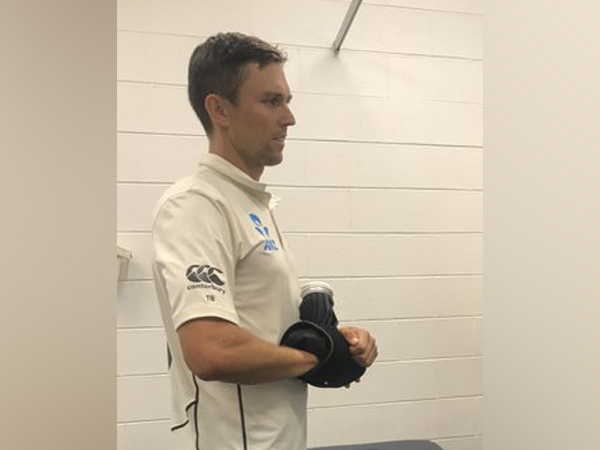 Melbourne [Australia], Dec 28 : New Zealand pacer Trent Boult has been ruled out of the Sydney Test after sustaining a fracture on his right hand.

While batting Boult was struck on his gloves by Mitchell Starc and the player was taken to hospital for x-rays during the tea break.

“Trent Boult suffered a fracture to the second metacarpal of his right hand after being struck while batting on day three of the second Test against Australia in Melbourne,” ESPNcricinfo quoted New Zealand Cricket spokesperson as saying.

Boult will return home after the conclusion of the ongoing Test against Australia. The replacement of the player will be announced before the final Test.

“An X-ray during the tea break confirmed the undisplaced fracture which will require around four weeks of rehabilitation, meaning Boult will return home to New Zealand at the end of the Test. A replacement player will be confirmed in due course,” the spokesperson added.

Boult had missed the first Test of the series, in Perth, because of a side injury, but recovered in time to play the Boxing Day Test.

Australia managed to take a massive lead of 456 runs over New Zealand on Saturday at the Melbourne Cricket Ground (MCG) in the ongoing Boxing Day Test.

Australia ended the day at 137/4 in the second innings, after bundling out Kiwis for 148 in the first innings.

The three-match series, which is a part of the ICC World Test Championship (WTC), is lead by the home side 1-0.

Centurion Test: England 255 runs away from win against South Africa