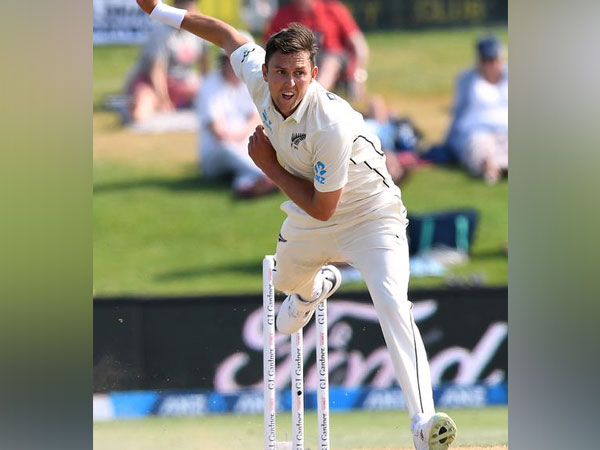 London [UK], Nov 25 : New Zealand pacer Trent Boult left the field due to a pain in the right-hand side of his ribs on the fifth day of the first Test against England, is likely to miss the second Test.

Boult, who bowled one over on the final day before going off, will undergo an MRI scan tomorrow to determine the extent of the injury, ESPNcricinfo reported.

In the second innings, Boult bowled six overs out of which four were maidens giving away just six runs. He didn’t get any wicket.

In the first innings, he bowled 31 overs and scalped one dismissal.

Neil Wanger and Mitchell Santner guided New Zealand to an innings and 65 runs victory over England in the first Test.

England resumed their innings from 55/3 on the last day of the first Test. Joe Denly and skipper Joe Root added 14 runs for the fourth wicket. Root (11) was out first, caught by Tom Latham at gully off Colin de Grandhomme, reducing England to 69/4.

Ben Stokes and Denly had a 52-run partnership to get past the 100-run mark. Stokes, after playing a knock of 28 runs, was bowled by Tim Southee.

England were in trouble after they lost Denly (35), Ollie Pope (6) and Jos Buttler (0) in quick succession.

Sam Curran and Jofra Archer then had a stand of 59 runs for the ninth wicket. Archer (30) was scalped by Neil Wanger, taking New Zealand close to victory in 97th over. In the next delivery of the same over, Wanger dismissed Stuart Board for a duck.

Earlier, Kiwis declared their first innings at 615/9d after BJ Watling’s wicket was claimed by was scalped by Jofra Archer after playing a knock of 205 runs. Watling was awarded player of the match for his glittering performance with the bat.

Both the teams will now face each other in the second Test at Hamilton from November 29 to December 3.

Wagner, Santner guide New Zealand to an innings and 65-run win over England