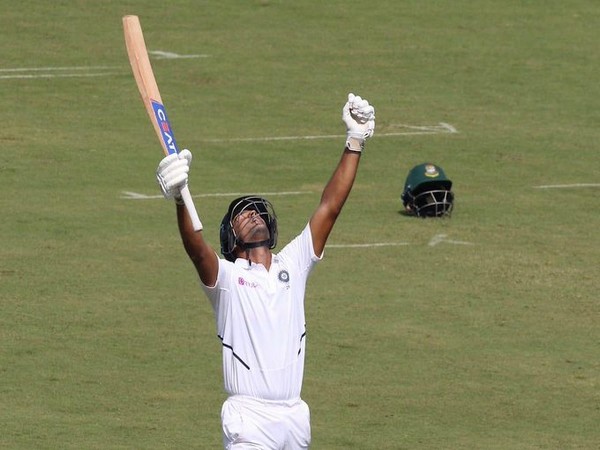 New Delhi [India], Nov 15 : India opener Mayank Agarwal after scoring second double ton in the Test said that it was a ‘tremendous feeling’.

Agarwal played a knock of 243 runs against Bangladesh in the first Test on day two. His innings was studded with eight sixes, the most by any Indian batsman in the longest format.

“I think it is a tremendous feeling to get a double hundred. It is a good feeling where I know I can come out there and bat well for the team and keep putting the team in good positions. I think it is very important that as an opener when you get a start you make good use of it,” Agarwal said on a bcci.tv chat with skipper Virat Kohli.

Hitting his 2nd double hundred, keeping the fitness level high & being the team man, Mayank discusses it all with the captain – by @28anand

When Kohli asked about what role fitness plays, Agarwal said it is the most important thing for the sportsperson.

“I think fitness plays a very very important role and you can’t lose out on big innings because you are physically tired. That is not acceptable so fitness plays a very important role. I’m working hard on fitness now you (Virat Kohli) know you set the standards right out there. The way this Indian team is playing is at a really high level,” Agarwal said.

Kohli lauded Agarwal and said he put the team first and that is why he had so many runs under his belt including two double tons in just eight games.

“The most impressive thing what I have seen with Mayank is, he has not come into the team wanting to grab his opportunity but he has come into the team to make the team win. That is why he is in this position, averaging more than 60 already. Still to get a start like that can only happen when you are thinking about how can I make team win not about this is my chance and I need to grab it. A great job is done. I hope you keep going for the team. Next time I want 300, not 200,” Kohli said.

India were at 493/6 at the end of play on day two. Mayank scored 243 runs while Ajinkya Rahane amassed 86 runs. India are leading by 343 runs with four wickets remaining after bundling out Bangladesh to 150.