Tim Bresnan, Former England Allrounder and One time Ashes player of the series winner has announced retirement from the cricket citing health issues and slew of body injuries.

Bresnan represented Yorkshire from 2001 to 2019. He left Yorkshire in June 2020 and joined Warwickshire later that month on a two-year contract. Bresnan scored 7,138 first-class runs, including seven centuries, and took 575 wickets at an average of 30.99.

“This has been an incredibly tough decision, but after returning to winter training I feel that this is the right time,” Bresnan was quoted as saying in Warwickshire’s press release. 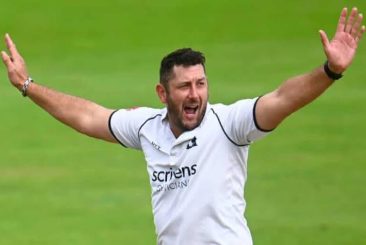 “I have continued to work hard throughout the off-season to prepare for my 21st professional year, but deep down I feel I can’t reach the high standards that I set myself and my teammates.”

“The hunger and enthusiasm that I have for the game I love will never leave me, but whilst my head is willing to tackle the 2022 season, my body is not.

“I will always look back at my career with immense pride and it’s been an absolute honour to represent Warwickshire, my home county and country. Growing up I never would have believed how lucky I was to play with and against some of the finest cricketers to grace the game.”

He was also in centre of some controversies when he was roped in a bullying episode with Azim Rafeeq in county cricket match at Yorkshire. Azim Rafeeq had alleged Tim Bresnan of his poor conduct and bullying.

“For any part I played in contributing to Azeem Rafiq’s experience of feeling bullied at Yorkshire, I apologise unreservedly,” Bresnan had then said in a statement.

“I must though categorically deny his accusation that I ‘frequently made racist comments’. This is absolutely not true.”

79 Percent of People Say Wellness Is Important, Per Report