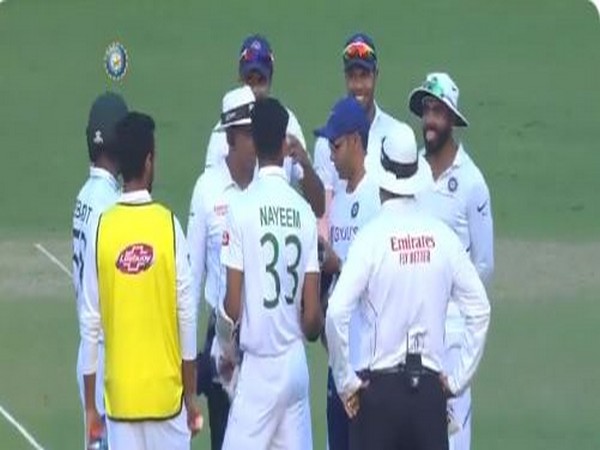 Kolkata (West Bengal) [India], Nov 22 : The ongoing day-night Test between India and Bangladesh witnessed an incident that highlighted the spirit of cricket as the Indian physio Nitin Patel was seen attending to Bangladesh’s Nayeem Hasan.

Hasan was struck on the helmet by a Mohammed Shami delivery.

Indian skipper Virat Kohli came running to the middle to check on the Bangladesh batsman.

Then, physio Patel came down to the crease to attend to Bangladesh’s lower-order batter.

Board of Control for Cricket in India’s (BCCI) official handle tweeted the video of the incident and captioned the post as: “In the end, it’s all about the #SpiritOfCricket. #TeamIndia physio, Mr. Nitin Patel attends to Nayeem after he gets hit on the helmet. #PinkBallTest”.

In the end, it’s all about the #SpiritOfCricket.#TeamIndia physio, Mr. Nitin Patel attends to Nayeem after he gets hit on the helmet.#PinkBallTest pic.twitter.com/pFXsUfXAUY

Ganguly’s selfie with Eden Gardens’ crowd is sure to win you over!

Some of my favourite cricket memories have come at Eden Gardens: Harbhajan Singh