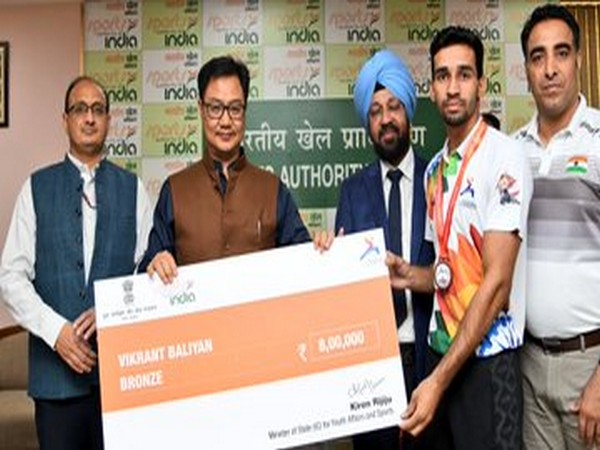 As a mark of appreciation, the Sports Minister handed over cheques to the winners. Praveen was given Rs 20 lakhs, Sanathoi and Poonam got Rs 14 lakhs each and Vikrant received Rs 8 lakhs.

Debutant Praveen made history for India by becoming the first athlete to win gold in the men’s event. He did so in the 48kg Sanda category, defeating Philippines’ Russel Diaz 2-1.

A member of the Army, Praveen revealed it was a sheer determination that made him bring home the coveted yellow metal.

“My Army coaches and mentors gave me the belief by motivating me and telling me constantly ‘tu yeh kar sakta hai’ (you can do it), right before the tournament,” the 22-year-old said.

“That gave me some confidence and every night as I lay down to sleep, I thought to myself that I can probably do it (win gold). Then I started working hard and during the camp 2 months back, I made up my mind, ‘agar aaana hai toh gold leke hi aana hai’ (I need to bring home a gold medal if I have to bring a medal)” added the silver medalist in the 2016 Asian Championships.

Sanathoi Devi clinched the silver in women’s 52 kg Sanda and her fourth overall medal in the Wushu World Championships. She had won medals earlier in 2011, 2013 and 2015. Poonam Khatri of Haryana also bagged a silver in women’s 75 kg sanda and the win is all the more special as it is her first World Championship medal after becoming a mother. Vikrant Baliyan, meanwhile, won a bronze in men’s 60 kg Sanda.

“I am very happy that four players have clinched medals from the Worlds. I praise the Wushu federation for their good work,” Rijiju said in a press release.

Adding that he is optimistic that Wushu will be included as an Olympic Sport in 2024, he said, “I have the belief that with the kind of performance they are putting up, Wushu athletes will bring home medals in 2024.”

He further added that the government is looking for more participation in the sport and plans to create better infrastructure for the sport.

Indore Test: India bundle out Bangladesh on 150, trailing by 64 runs