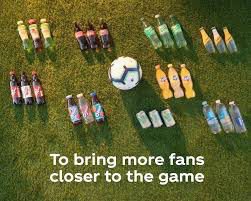 The English club soccer’s top flight, Premier League has announced a partnership deal of three and a half year with the soft drink major Coca-Cola Great Britain.

The deal which is scheduled to start by 2019 will mark the first sponsorship deal where Coca-cola will try to focus on its low and no sugar beverage products.

In the wake of partnership, the Premier League and Coca-Cola will collaborate on a range of Physical and digital activation, including a trophy tour across the UK.

Coca-cola while collaborating with the League will try to engage and boost up fans offering them an opportunity to get even closer to the league and connect with the game they adore, featuring premier league trophy tour across the UK.

After the deal, Coca-Cola will become the seventh official partner of the Premier League alongside existing lined up companies of EA Sports, Barclays, Cadbury, Carling, Nike, and TagHeuer.

“The Premier League is one of the most diverse leagues in the world and unites people with a shared passion for football and we’re looking forward to working together to help bring fans to closer to the action,” said Jon Woods, general manager of Coca-Cola Great Britain and Northern Ireland.

“The partnership gives us an opportunity to showcase the range of drinks we offer which we are proud to make here in Great Britain and will help us to raise awareness of our no sugar drinks.”

“We are excited that this is Coca-Cola Great Britain’s first portfolio-wide partnership and they will be bringing it to life across a range of brands,” added Premier League managing director Richard Masters.

“We know from their previous campaigns in the sport they are excellent at communicating to fans across the globe and they have some exciting ideas – including a nationwide trophy tour – that will see the league benefit from their huge reach in the UK and across the world.”