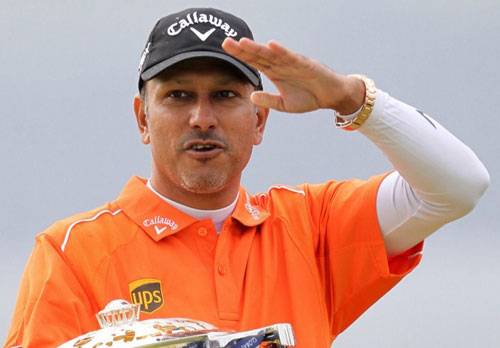 The Chandigarh leg of the domestic PGTI tour will now called The Jeev Milkha Singh Invitational Presented by take Solutions.

With the announcement, Jeev Milkha becomes the first player in the history of Indian golf to get a tournament named after him.

The golf tournament will be played at the Chandigarh golf club, which happens to be Jeev Milkha’s home club, from November 1st to 4th and the enhanced prize sum will be rupees 1.5 crores.

There was an increase of 50 lakh as compared to the last year winning prize sum which was bagged by Shubhankar Sharma.

“It’s just an amazing honour. You have tournaments named after legends like Arnold Palmer and Jack Nicklaus on the PGA Tour in the US. I have always thought it was the greatest recognition for players to have the Tour name its events after them. I never thought I’d have the same honour one day. I am truly humbled,” the 46-year-old said.

Jeev said he didn’t have to think twice before accepting the honour.

“Not only is a tournament being named after me, it is also in my hometown of Chandigarh and being played at Chandigarh Golf Club, and I owe a lot to both these places,” he said.

“I’d like to thank Take Solutions, and its founder Mr HR Srinivasan. For them to propose that someone else’s name take the limelight when they are footing the bill, just shows they have their heart in the right place for the game. And thanks also to the PGTI to agree to this,” added the Padma Shree and Arjun Award winner, widely considered as a trailblazer for Indian golf because of his international achievement.

Jeev said he plans to do full justice to the tournament as a host, but that would not stop him from trying to win the title.

“The last few years have been tough for me because of various injuries. However, I can feel that things are slowly turning around. The first objective would always be to win the tournament, even if it means I am being an ungrateful host,” said the four-time champion on the European Tour and twice Order of Merit winner on the Asian Tour.

He also expressed his desire to make the tournament the city’s first-ever Asian Tour event and said he would be asking all his friends on tour to participate.

“I do have a few thoughts to make the Jeev Milkha Singh Invitational Presented by Take Solutions a world-class event. To begin with, I will definitely be requesting my friends and colleagues on the Tour to come and play, and make all the players feel comfortable and welcome at the event,” he said.

Managing Director of Take Solutions, HR Srinavas, said: “It is to honour one of the country’s greatest sportsman and the best ambassador of golf we have. This is our little but meaningful contribution to development of professional golf and golfers in India.” Cor APA SSC SSC