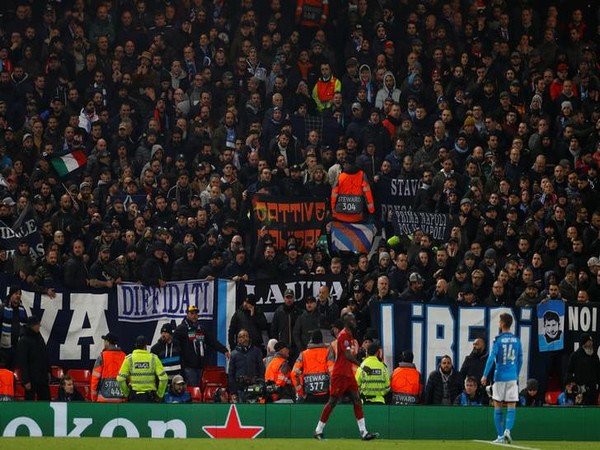 Liverpool [UK], Nov 28 : Five Napoli fans have been arrested for creating ruckus before the match against Liverpool in the Champions League, Merseyside Police confirmed on Thursday.

“Officers policing the LFC v Napoli CL game have arrested 5 Napoli fans. 3 men were arrested for violent disorder and another was for affray following disorder on Walton Breck Rd before the game. A fifth man was arrested for breach of the peace at the turnstiles on Anfield Road,” Merseyside Police tweeted.

Liverpool and Napoli played out a 1-1 draw in the ongoing Champions League on Wednesday (local time).

Napoli put the defending champions on the back foot in the opening half after registering a goal in the 21st minute of the match. Dries Mertens netted the ball into the goalpost.

No other goals were registered in the first half, and as a result, Liverpool went into the break with 0-1 deficit.

In the second half, Liverpool was seen maintaining the bulk of the possession and their efforts finally paid a dividend as Dejan Lovren scored for the side in the 65th minute, bringing the scoreline to 1-1.

Liverpool and Napoli failed to register more goals and as a result, the match ended up as a draw.

With this result, the Reds moved to the first place in Group E of the Champions League with 10 points from five matches, while Napoli sits on the second place.