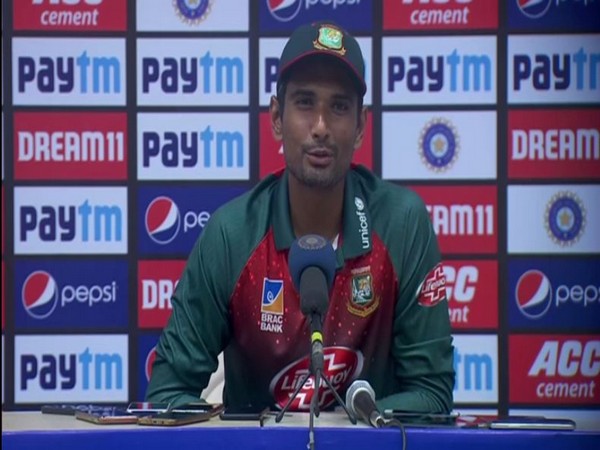 Nagpur (Maharashtra) [India], Nov 11 : After facing a 30-run loss against India in the final T20I of the three-match series, Bangladesh skipper Mahmudullah said that losing wickets in a cluster cost them the match.

Chasing 175 for the win, Bangladesh was bundled out for 144, giving the Men in Blue a win by 30 runs. Deepak Chahar proved the main destructor as he scalped six wickets in the match.

“We had a chance. When we needed 49 runs off 30 balls, we had a chance but in the end, we lost wickets rapidly and that is what cost us the match. I am just disappointed that Naim played such a good inning, but we failed to win the match. If we would have won, it would have given Naim a lot of credit,” Mahmudullah told reporters.

Mohammad Naim played an 81-run knock to give Bangladesh a glimmer of hope in the match, but his dismissal at the hands of Shivam Dube ended the Bangla Tigers’ hopes of going away with a victory.

Bangladesh had lost two early wickets in the match, but Naim and Mohammad Mithun put up a 98-run stand to allow the side to keep Indian bowlers at bay.

However, their dismissals in quick succession gave India the upper hand in the match.

“We lost two wickets quickly, the partnership between Mithun and Naim was incredible, it was good to see and especially the young Naim batted superbly, but in the end, it came down to how we lost the wickets in a cluster,” Mahmudullah said.

“If you see we did similar mistakes in our past matches, and the big teams are quite good in this department. Having said that, the wicket was good to chase down the target, our bowlers did a good job in restricting them to 174. In the end, I think it was our mistakes that cost us the match,” he added.

Earlier, Shreyas Iyer and KL Rahul’s knocks of 62 and 52 respectively enabled India to post a score of 174/5 in the allotted twenty overs.

Shafiul Islam was the pick of the Bangladesh bowlers as he scalped two wickets.

India and Bangladesh will now face each other in the two-match Test series and the first game will be played from November 14-18.

Rohit’s pep-talk got us motivated to win the match, says Shreyas Iyer