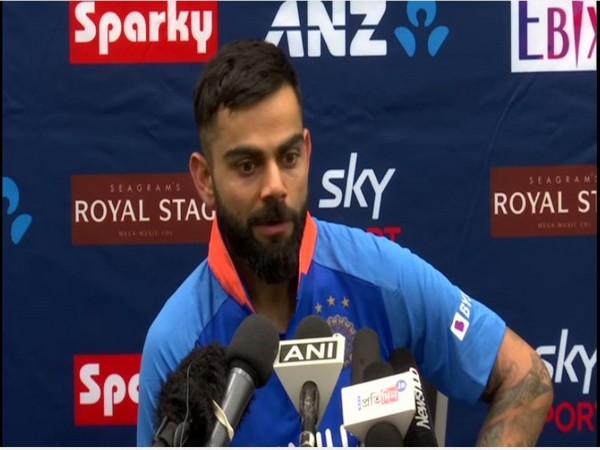 Hamilton [New Zealand], Feb 4 : India skipper Virat Kohli on Tuesday hailed the never-say-die attitude of the Men in Blue, saying the team has worked really hard off the field to achieve the results which are evident now.

He said that once the team gains an unassailable lead in the bilateral series, it is easy for any player to think about individual performances, but the Men in Blue always have the bigger picture in mind.

India became the first team in T20I history to whitewash their opponent in a five-match T20I series. The Men in Blue defeated New Zealand 5-0.

“When I became the captain, it took me time to understand how the team is reacting, you have to understand your players, it takes time to do everything. The mindset of winning from any position is something we have had from the first day, Kohli told reporters ahead of the first ODI against the Kiwis.

“We were 3-0 up in the series, it was easy for everyone to think about their individual performances and take it easy. But everyone wanted to win 5-0, we have good players overall as they all see the big picture. We have worked really hard and now the results are there for everyone to see. As a team, we are playing really good collective cricket,” he added.

Kohli also said that T20 cricket is demanding in its own way. He also hailed the fitness levels of his side and said it has helped in making decisions faster and better.

“There is a different approach to ODIs and T20Is. In ODIs, you do not play with that intensity which is used in T20Is. T20Is is more demanding, physically when you are tested more, your decision making is also tested more,” Kohli said.

“Our fitness levels are there for everyone to see and it is helping us to make the decisions better and faster. T20I cricket is also demanding in its own way,” he added.

India will take on New Zealand in the first ODI on Wednesday.

Kobe Bryant’s demise has put everything in perspective for me: Kohli