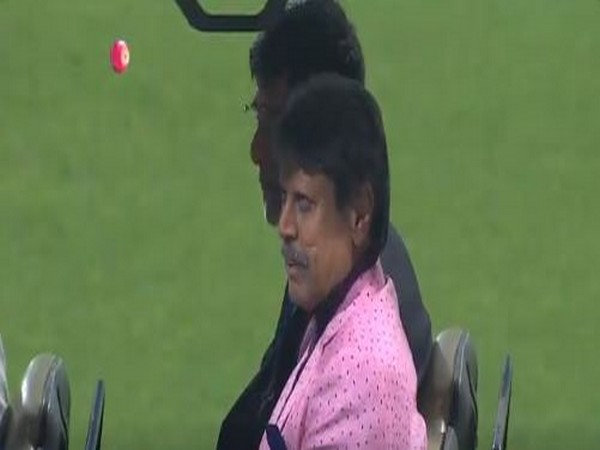 Kolkata (West Bengal) [India], Nov 22 : During the tea break of the ongoing day-night Test between India and Bangladesh, many legends were seen taking a lap of honour here at the Eden Gardens.

Among the men’s cricketers, Sachin Tendulkar, Rahul Dravid, Kapil Dev, Anil Kumble, Krishnamachari Srikkanth, Dilip Vengsarkar and Mohammad Azharuddin took a lap around the ‘Mecca of Indian cricket’ and were seen waving around the ground.

Mithali Raj, Jhulan Goswami and former women’s player Shantha Rangaswamy also marked their presence at the historic match and waved towards the crowd.

Board of Control for Cricket for India’s (BCCI) official handle tweeted the video of cricketers taking a lap of honour and captioned the post as: “A galaxy of Indian stars both present and former greats take a lap of the Eden Gardens on this historic moment of India’s first-ever #PinkBallTest #INDvBAN #TeamIndia”.

A galaxy of Indian stars both present and former greats take a lap of the Eden Gardens on this historic moment of India’s first-ever #PinkBallTest #INDvBAN #TeamIndia pic.twitter.com/2qM5iaw0SI

In the ongoing day-night Test, India bundled out Bangladesh for a score of 106.

Ganguly had invited the Bangladesh PM for the historic occasion.

Before the start of the play, Hasina and Banerjee at 12.58 pm rang the Eden Bell in the presence of BCCI president Ganguly, secretary Jay Shah.

While filing this report, India had reached the score of 72/2.