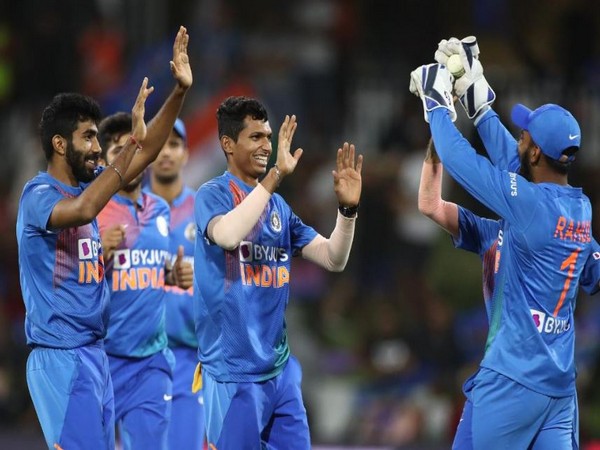 Tauranga [New Zealand], Feb 2 : India whitewashed New Zealand in the five-match T20I series as they defeated the hosts by seven runs in the fifth game here on Sunday.

With this clean sweep, India became the first team to win a T20I series by 5-0.

Chasing a target of 164 runs, New Zealand witnessed a very poor start as three of their batsmen were sent back to the pavilion before the completion of four overs.

Martin Guptill was given LBW off Jasprit Bumrah’s delivery and Washington Sundar bowled Colin Munro while Tom Bruce was run out.

Tim Seifert and Ross Taylor then took the charge of the chase and provided their side a good momentum. Both played furiously and scored 34 runs off Shivam Dube’s over which put the hosts on a commanding position.

The duo formed a 99-run partnership before Seifert was dismissed by Navdeep Saini after scoring 50 runs. Soon after, Bumrah bowled Daryl Mitchell (2) to bring India back in the game.

The fall of wickets did not stop as Mitchell Santner and Scott Kuggeleijn were sent back to the pavilion by Shardul Thakur in the 17th over. In the next over, India got the much-anticipated wicket of Ross Taylor (53), who was caught behind off Saini’s delivery.

New Zealand lower order failed to take their side over the line as they faced their fifth successive defeat.

Earlier, after opting to bat first, India got off to a bad start as Scott Kuggeleijn dismissed Sanju Samson (2) in the second over of the innings.

The opener KL Rahul was then joined by Rohit Sharma on the field. Both played brilliantly and struck regular boundaries. The duo formed an 88-run innings before Hamish Bennett got hold of Rahul, who missed his half-century by five runs.

Shreyas Iyer was the next batsman and joined Sharma, who went on to score his half-century. In the 17th over, bowled by Ish Sodhi, Sharma was retired hurt after scoring 60 runs. Shivam Dube then came out to bat but failed to leave a mark as he was dismissed after scoring five runs.

Iyer and Manish Pandey struck a few boundaries to help India reach a total of 163 runs.

Some of stuff Firmino does is madness, says Henderson