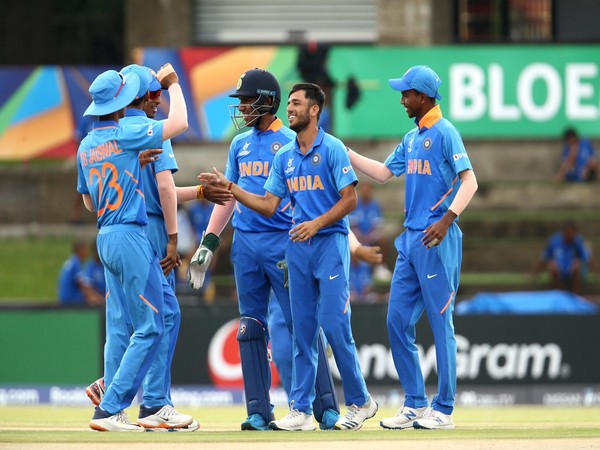 Bloemfontein [South Africa], Jan 24 : India colts defeated New Zealand by 41 runs in their final match of the group stages of the ongoing U-19 Cricket World Cup here at Mangaung Oval.

With this win, India top Group A with six points from three matches. Now, the Boys in Blue will take on Australia in the quarter-finals on Tuesday, January 28.

Chasing 192, New Zealand got off to a quickfire start as openers Rhys Mariu and Ollie White put on 50 runs inside six overs. India finally got the breakthrough of White (14) in the sixth over as Ravi Bishnoi sent him back to the pavilion.

In the ninth over, Atharva Ankolekar provided the key breakthrough of Mariu (42), reducing New Zealand to 83/2.

New Zealand lost their way in the middle overs. As a result, they were reduced to 116/5, needing 76 runs from 47 balls.

The Kiwis kept on losing wickets at regular intervals and in the end, India registered victory by 41 runs.

After being put in to bat, India got off to a solid start as openers Yashasvi Jaiswal and Divyaansh Saxena put on 103 runs in 21 overs.

However, the rain halted the match with Jaiswal and Saxena being unbeaten on 53 and 44 respectively.

The match finally resumed after almost two hours, and it was curtailed to 23-overs per side.

India added 12 more runs to their total and the side finished at 115/0 from 23 overs. According to the Duckworth-Lewis method, New Zealand got a 192-run target.

India had earlier defeated Sri Lanka and Japan in the group stages.

In their match against Japan, Indian colts displayed a clinical bowling performance to bundle out the opponents for just 41.

Great feeling to finish match with a six: Shreyas Iyer