ICC Team of 2021 features no Indian Player, Names Babar Azam as Skipper for the team. As it’s ritual for the years that passed ICC announces the team of the year and player of the year and months. On the same lines ICC announced T20I Team of the year 2021 and surprisingly named no Indian player in the Elevens. This absence from the ICC team may be attributed to little sub-optimal games played by Indian team which in turn may be attributed to less availability of mental peace and sufficient health issues along with bio bubble fatigue. 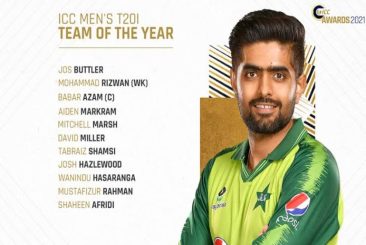 The Pakistan skipper was at his classy best in the shortest format in 2021, leaving his best at the T20 World Cup where he ended the tournament as the leading run-scorer.

Overall, Babar played 29 matches and aggregated 939 runs at an average of 37.56 with one century and nine half-centuries. His captaincy was also praised as he led his team to the semi-finals of the T20 World Cup in UAE and Oman.

The Pakistan wicketkeeper-batter ruled the roost in 2021 when it came to the shortest format of the game. Aggregating a staggering 1326 runs in only 29 matches, Rizwan struck at an average of 73.66 and a strike-rate of 134.89.

Apart from his exploits with the bat, he was as solid as ever behind the stumps, playing a key role in Pakistan’s run to the semis during the ICC Men’s T20 World Cup 2021, where he ended up as the third-highest run-scorer.

It was a year to remember for Shaheen Afridi too, who got a spot in the ICC Team of the year 2021. He was magical with his hands, took some great fishes in his clutch.