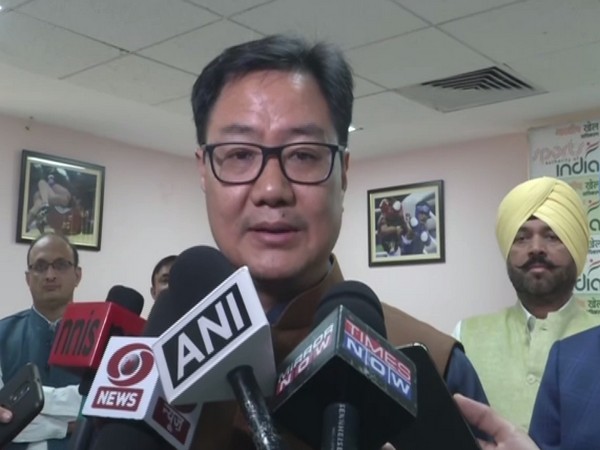 New Delhi [India], Nov 14 : Union Minister for Youth Affairs and Sports, Kiren Rijiju is happy with the outcome after meeting the members of the Indian Olympic Association (IOA) and a delegation of the Commonwealth Games Federation (CGF) on Thursday.

“We had a fruitful discussion today and I appreciate that the CGF has taken serious note of the issue. We will need a few more rounds of discussions, but I am happy with the fact that we have made a positive start,” Rijiju said in an official statement.

Rijiju met to discuss several issues, including the exclusion of shooting from the Commonwealth Games 2022. The outcome of the meeting was very positive, with all stakeholders agreeing to work towards a solution to the issue.

In a statement, CGF said, “The CGF appreciates the concerns expressed by India about the non-inclusion of shooting as a competitive event at Birmingham 2022 and we are committed to working together for finding a solution to this.”

“Following our discussions, the CGF are increasingly hopeful that the athletes of India will compete at the Birmingham 2022 Commonwealth Games. We acknowledge and respect that this decision will ultimately be taken by the sports community of India but have been delighted with the opportunity to discuss the refreshed vision of the Commonwealth Sports Movement and India’s important role in achieving it,” the statement added.

The delegation, which also visited the Indira Gandhi National Stadium and the Jawaharlal Nehru Stadium during the day, appreciated the Sports Ministry’s initiative of opening up sports facilities for sportspersons and sporting events, free of cost.