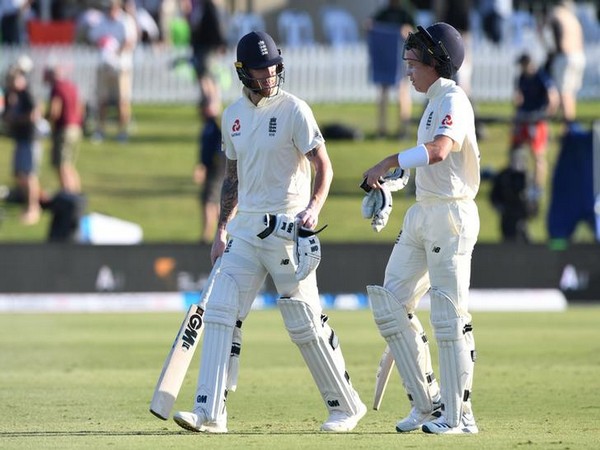 Mount Maunganui [New Zealand], Nov 21 : England scored 214 runs before the end of play on day one of the first Test against New Zealand at the Bay Oval here on Thursday.

England won the toss and elected to bat first. Openers Rory Burns and Dom Sibley had a stand of 52-run for the first wicket.

Kiwis got their first breakthrough when Sibley (22) was scalped by Colin de Grandhomme in the 22nd over.

Joe Denly joined Burns in the middle and put together 61 runs for the second wicket. Burns, after scoring 52 runs, was sent back by Grandhomme, reducing England to 113/2 in 45.1 overs.

Skipper Joe root came in to bat at number four but failed to leave his mark on the scoreboard. He was picked by Neil Wanger.

All-rounder Ben Stokes and Denly built an 83-run partnership to guide the team past the 200-run mark. In the 82nd over Denly (74) gifted his wicket to Tim Southee.

Stokes and Ollie Pope are unbeaten at scores of 67 and 18 runs respectively and will resume their innings on day two. At the end of play England were at 241/4.

For Kiwis, Grandhomme bagged two wickets while Southee and Wagner clinched one wicket each.

Day-night Test would be a challenge for spinners, says K Srikanth