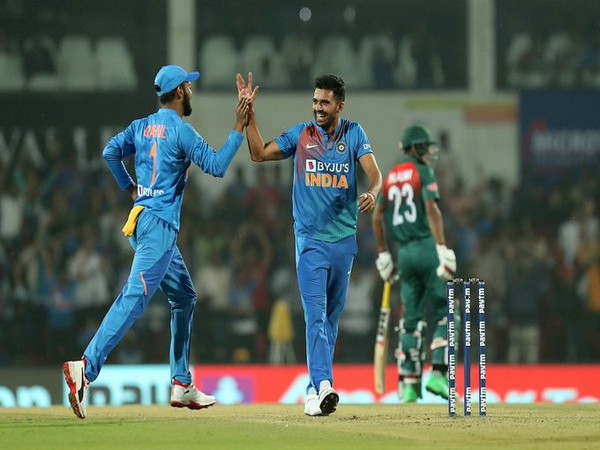 New Delhi [India], Nov 11 : The cricket fraternity congratulated Deepak Chahar after the seamer became the first Indian male to take a hat-trick in the shortest format of the game.

Legendary Indian batsmen Sachin Tendulkar took to Twitter and wrote: “Exceptional bowling by @deepak_chahar9! He bowled very smartly and used his variations well to pick up crucial wickets at crucial stages. Special mention to @IamShivamDube, @ShreyasIyer15 & @klrahul11 to give #TeamIndia the series victory in the decider #INDvsBAN.”

“Very impressed with the way @deepak_chahar9 has evolved as a T20I bowler. Always had the ability to pick up wickets with the new ball but has worked hard to bowl in the middle and end overs. Got a lot of variations up his sleeves & knows when to use them. #INDvsBAN,” tweeted VVS Laxman.

India defeated Bangladesh by 30 runs on Sunday to win the three-match series 2-1.

Chasing 175 for the win, Bangladesh was bundled out for 144.

India and Bangladesh now take on each other in a two-match Test series.

The first match will be played from November 14-18.