Replacing a decade old equipment partner of the Badminton Korea Association, Yonex has superseded Victor off the court. 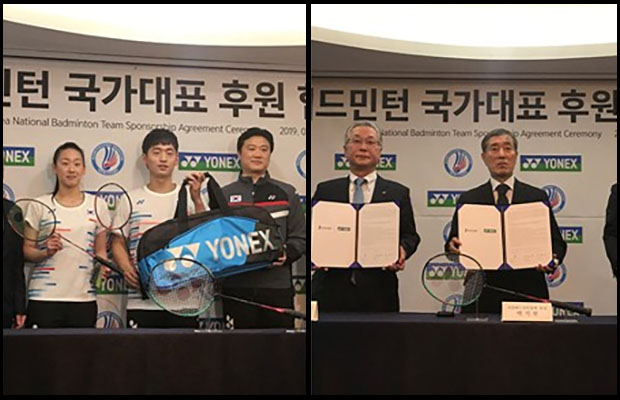 The Badminton Korea Association signed a four year contract with Yonex in Seoul after a haul of almost a month during which the national team of Korea was without an official sponsor.

Notably, the BKA has been associated with Victor for a decade, signing them as the official equipment partner in 2009.

The President of BKA, Park ki Hyun said,” “The disappointing results last year were among many challenges faced by the BKA and the national team players last year and another was the premature cancellation of our last sponsorship contract, two years into the four-year contract,” said BKA President Park Ki Hyun.

“It has been customary for the BKA to make 4-year sponsorship contracts, basically on each Olympic cycle but with this one rescinded early, it is obviously a break in that pattern.  We realized that things might be different again two years into this contract, once the Olympics are over but the BKA and Yonex still thought we’d go ahead and make it for four years.”

While commenting over this crucial deal for Korean Badminton, The president of Yonex Kusaki Hayashida said,” We consider Korea to be one of the top badminton nations and we are committed to improving the competitiveness of the Korean team for the future”.

The Partnership deal also marks Yonex’s return to the Korean Badminton after a gap of decade. Erstwhile, Yonex held a contract with the Korean national badminton from 1982 till 2009.

As per the deal, Yonex will cater the Korean national badminton team with racquets, apparel, bags, shoes, shuttlecocks and other equipment.