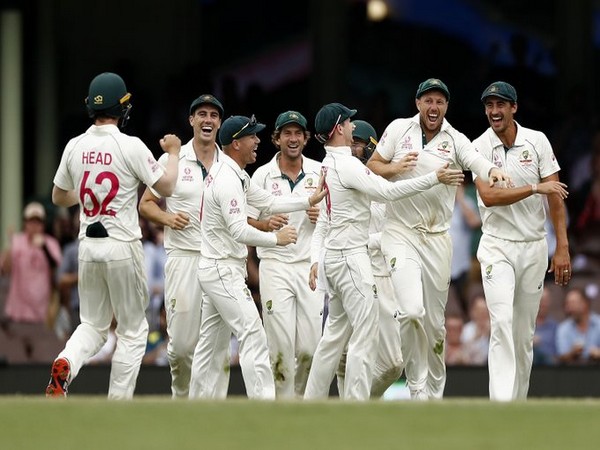 Sydney [Australia], Jan 6 : Australia defeated New Zealand in the third Test by 279 runs and clinched the series 3-0 at the Sydney Cricket Ground on Monday.

Chasing 416 runs, New Zealand were restricted to 136/9 on day four as Matt Henry did not come to bat. Henry had broken his thumb while bowling on day three.

The visitors suffered a bad start as they lost both the openers cheaply. Tom Blundell (2) and skipper Tom Latham (2) were sent back to the pavilion by Mitchell Starc, reducing Blackcaps to 4/2 in 4.3 overs.

Ross Taylor and Jeet Raval stitched a brief partnership of 18-run for the third wicket. The latter was caught behind the stumps by Tim Pain off Nathan Lyon after scoring 12 runs.

Glenn Phillips was too dismissed by Lyon on a duck. Meanwhile, Taylor became the highest run-getter for New Zealand in Test cricket. He now has 7174 runs under his belt in 99 games.

He surpassed Stephen Fleming who previously held the record for scoring the most runs for New Zealand in Test cricket. He made 7172 runs in 111 games at an average of 40.06

Colin de Grandhomme joined BJ Watling in the middle and built a 69-run partnership. Kiwis kept on losing wickets at regular intervals as wicket-keeper batsman Watling departed after playing a knock of 19 runs.

Except for all-rounder Grandhomme, no other batsmen were able to get past the 30-run mark. He amassed 52 runs in 68 balls.

Australia have strengthened their position at number two in the World Test Championship (WTC) table after a perfect home summer. They have 360 points in 10 matches, just behind India who had equal points in seven games.