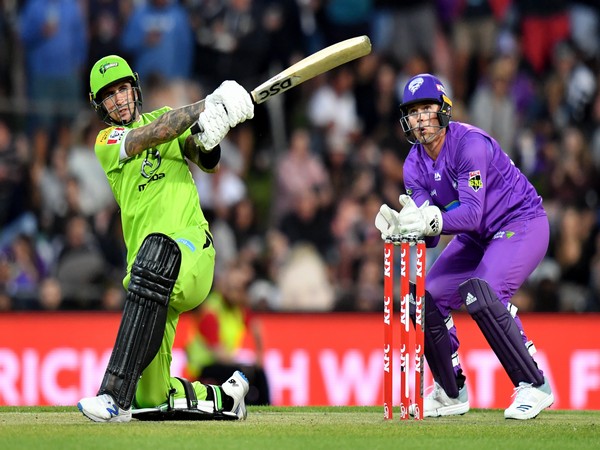 New Delhi [India], Jan 31 : Sydney Thunder batsman Alex Hales on Friday denied that he acted against the spirit of cricket during the Big Bash League (BBL) Eliminator against Hobart Hurricanes.

Taking to Twitter Hales wrote, “Interesting that walking in with the bowler to cut off a single is absolutely fine, but walking back on to the ring when they’re teeing off is cheating? Never heard anyone talk about that in regards to the ‘spirit of the game’ in my entire career.”

Hales spoke to umpire Paul Wilson briefly after a mis cue from Hurricanes batter Simon Milenko fell short of him at mid-off while he was standing outside the 30-yard circle, having started as one of the four fielders required to be within the circle.

The English T20 star stressed he had not broken any rules. Cricket Australia’s BBL playing conditions only require fielders to be within the circle “at the instant of delivery” and bird’s eye footage aired on Channel Seven appeared to show Hales abiding by that for the chance off Milenko, cricket.com.au reported.

The Hales on-field act did not go well with former Australian captain Ricky Ponting and he criticised the English batsman for such a move.

“Take your position and then walk in with the bowler, you can’t go backwards,” said the former Test captain. He was supposed to be one of four fielders inside the circle. He starts walking back outside the circle before the ball is being bowled,” Ponting said.

“Anyone of us who have played the game, we know we’re not allowed to walk back in the field. It’s not against the rules but it’s against the spirit of the game,” he added.

On the other hand, Hales justified himself and said “I don’t think it’s bad sportsmanship at all”.

“I don’t think there is anything wrong with trying to anticipate and trying to get one step ahead of the batter,” said Hales, who earlier struck three sixes in a match-winning 37-ball 60.

“Once the ball is let go and you see the batsman swing, you can react in the field and come forward or back. I think it’s fine. It’s part-and-parcel of fielding, trying to anticipate,” he added.

Sydney Thunder won the match by 57 runs against Hobart Hurricanes and will now play against Adelaide Strikers in a knockout clash at Adelaide on February 1.

Kane Williamson ruled out of fourth T20I against India